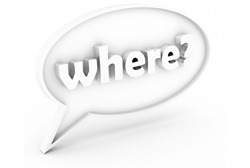 On to the question of place. Much like time, place is an under-examined element of creating a compelling and intelligible story.

I, for one, was not sure how to get my character’s bodies gracefully around the space of my fictional world. There was a lot of walking into rooms, and climbing into cars, and other mundanities in my first draft. Some of that is necessary. After all, nothing loses a reader faster than an inconsistency in the hard rules of time and space. (Unless of course, that’s your thing. Sci-Fi writers, you may be off the hook on this one.) If your character walks in through a slapping screen door, she can’t suddenly walk out of the same door and have it be squeaky sliding glass. The mirage is broken. And your reader will likely stop reading.

So on the micro level, both varying these specific transitions, and paying careful attention to their consistency are of paramount importance.  But there is a macro level of place which I also struggled with mightily in my first draft: where are my characters on a map? Where do they live?

Some novels have a very strong sense of place—so strong that it functions in the story like another character. Shantaram by Gregory David Roberts could not exist anywhere but India. Similarly, Pat Conroy’s works need South Carolina, and Rodes Fishburne’s debut novel Going to See the Elephant can’t be separated from the city of San Francisco. These authors began with the question of place, it seems, and built a story around it.

But there is an alternative to this model. One can create an entirely fictional place. Stephen King is the master of the fictional town(s)—having created three of them situated within the state of Maine to act as backdrops for various works. They borrow heavily from the reality of Maine, with which King is intimately familiar, but they do not exist. They are no-doubt composites of real towns and the artfully imagined.

This was the most appealing of the options to me. I wanted a fictional place. Much of my novel draws from my own life experiences. But it is fiction and I didn’t want to tie the book to the factual locations of my life, lest someone confuse it for a memoir or even creative nonfiction. It is decidedly not those things.

The problem is that I didn’t make that decision until midway through the second draft. In the first draft, I refused to commit. I waffled. Do I set the book in Virginia? In Richmond? In an imaginary town? What should I call my imaginary town? Should I have the secondary characters live in real towns? Imaginary towns? In Virginia or another state? On and on I circled, not knowing. The result was a decided absence of place. I, who love novels that embrace place as their very fabric, had written a first draft with no notions of place.

Correcting this problem later has proven difficult. But, I think writing the first draft served to answer some of those questions, too.

How have you handled place in your novel, Agile Writers?